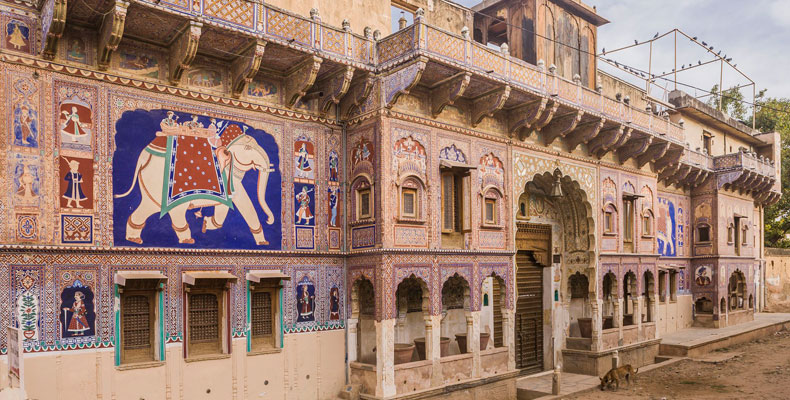 The realm of lovely havelis, harking back to the yester years, epitomizes the beauty of Shekhawati – a region that comprises of Sikar, Jhunjhunu and Churu. It is a major landmark tourist destination of colourful Rajasthan. Once the bastion of Rao Shekha, this magnificent land, located on the North of Rajasthan, derives its nomenclature from the former.

Sethani Ka Johara lies on the north side of the road perhaps 5 km west of Churu along the Ratangarh road. It is perhaps the finest johara (reservoir) in the area in that it is not only attractive but also efficient, holding a store of water, often from one monsoon to the next.

Kanhaiyalal Bagla Haveli is a beautiful structure, which stands on the south of the main bazaar. Constructed in around 1880, the haveli represents the finest lattice work and architectural styles in the entire Shekhawati region.

Aath Kambh Chhatri, one of the buildings possessing great historical significance, is an eight pillared dome that stands on the northern side of the town.

Located on the Agra-Bikaner Highway, the Ratangarh Fort was built in the early 18th century by Surat Singh, who named it after his son Ratan Singh, and boasts imposing gateways, several monuments (which are mostly in ruins today) and a clock tower, which is also known as Ghantaghar.

Laxmangarh stands tall as the most impressive building in Laxmangarh town, looming majestically over the well laid township on its western side. An exceptional specimen of fort architecture in the entire world, Laxmangarh Fort is built upon scattered pieces of colossal rocks.