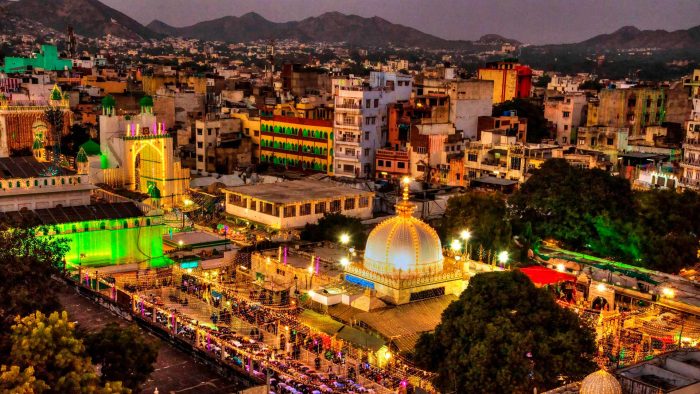 THE TOWN OF FAIRS AND FESTIVITIES

Ajmer is bustling city, located 130 km southwest of Jaipur and just 14 km from the pilgrimage town of Pushkar. The city of Ajmer gets its name from “Ajay Meru”, which can be roughly translated as “invincible hill”. Home to a number of tourist places, Ajmer can be a perfect representation of the diversity of the Indian culture and ethics, and displays a perfect blend of religion, community, culture, etc., coexisting and flourishing in harmony.

This is a Sufi shrine which encloses the ‘maqbara’ (grave) of Garib Nawaz, the Sufi saint Khwaja Moinuddin Chisti. Built in the 13th century, the shrine is popular among people of all faiths who flock here to have their prayers answered.

The Adhai Din Ka Jhonpda was originally built to function as a Sanskrit college but was later converted into a mosque by Sultan Ghori in 1198 AD. An impressive blend of Indo-Islamic architecture, the structure was further beautified by Sultan Iltutmish in 1213 AD.

Anasagar Lake is a scenic artificial lake, commissioned and built by Arnoraj Chauhan, son of Ajaypal Chauhan, between 1135 and 1150 AD. Arnoraj was also known as Anaji, which gives the lake its name.

A beautiful artificial lake that appears flat, Lake Foy Sagar was built by an English engineer, Mr. Foy in 1892 AD. Interestingly, this work was taken up to provide famine relief through wage employment to locals.

Kishangarh Fort is a beautiful fort located in Kishangarh, Rajasthan. On visiting the fort, one will see jails, granaries, armouries and other significant buildings present inside of it. The Durbar Hall is its biggest structure, and was the place where the kings carried out their official meetings on a daily basis.

Pushkar is one of the oldest cities in India. Located to the northwest of Ajmer, the tranquil city of Pushkar is a favoured destination for thousands of tourists and devotees flocking to Rajasthan. Situated at a height of 510 metres, Pushkar is surrounded by hillocks on three sides. The ‘Nag Pahar’, literally meaning Snake Mountain forms a natural border between Ajmer and Pushkar. Known as ‘the rose garden of Rajasthan’, the essence of the famous Pushkar rose is exported all over the world. Along with an interesting mythological history, a legacy of timeless architectural heritage makes Pushkar a fascinating city.

According to Hindu scriptures, the sacred Pushkar Lake is described as ‘Tirtha Raj’, the king of all pilgrimage sites. No pilgrimage is considered to be complete without a dip in in the holy Pushkar Lake. Semi-circular in shape and about 8-10 metres deep, Pushkar Lake is surrounded by 52 bathing ghats and over 400 temples and is truly a magnificent sight to behold.

Nestled in the picturesque Pushkar valley beyond the Nangaparvat and Anasagar Lake, the Brahma temple holds a special place in the hearts of Indians. It is the only temple in the world dedicated to Lord Brahma.

The gracious and conspicuous Rangji Temple is another popular shrine that witnesses thousands of pilgrims and tourists every year. The temple is dedicated to Lord Rangji, believed to be an incarnation of Lord Vishnu.